The Two Tabernacles of Moses 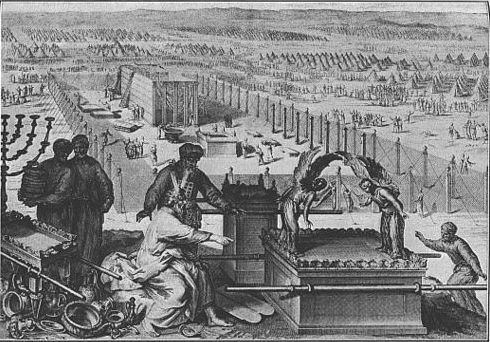 The Erection of the Tabernacle
Click For Full Size

While Moses was up on Mt. Sinai receiving the Ten Commandments written on the two stone tablets, and he delayed coming down, the Israelite people in the camp near the mountain, gave Aaron their gold jewelry from Egypt and he made a golden calf for the people to worship. The next day they had a festival “to Yahweh” (supposedly they thought they were worshipping the LORD1 (Yahweh) by worshipping the calf, Exo 32:5). They offered burnt offerings to the calf and sacrificed to it then they began to revel (laugh, jest, play, and make sport, etc.). God told Moses to get down to them pronto. God threatened to destroy them, but Moses interceded for them and God relented. When Moses got to the camp the people were running wild, unruly, and unrestrained. They were a derision and a shame to their enemies who ridiculed them. Dr. Adam Clarke put it this way:

“They were stripped, says the Targum, of the holy crown that was upon their heads, on which the great and precious name Jehovah was engraved. But it is more likely that the word פרע parua implies that they were reduced to the most helpless and wretched state, being abandoned by God in the midst of their enemies. This is exactly similar to that expression, 2Ch 28:19 : For the Lord brought Judah low, because of Ahaz king of Israel: for he made Judah Naked, הפריע hiphria, and transgressed sore against the Lord. Their nakedness, therefore, though in the first sense it may imply that several of them were despoiled of their ornaments, yet it may also express their defenceless and abandoned state, in consequence of their sin. That they could not literally have all been despoiled of their ornaments, appears evident from their offerings. See Exo 35:21, etc.” — Adam Clarke’s Commentary on the Bible, Adam Clarke, LL.D., F.S.A., (1715-1832).

(Exo 32:26-29) Then Moses stood in the gate of the camp, and said, “Who is on the LORD’s side? Come to me!” And all the sons of Levi gathered around him. He said to them, “Thus says the LORD, the God of Israel, ‘Put your sword on your side, each of you! Go back and forth from gate to gate throughout the camp, and each of you kill your brother, your friend, and your neighbor.'” The sons of Levi did as Moses commanded, and about three thousand of the people fell on that day. Moses said, “Today you have ordained yourselves for the service of the LORD, each one at the cost of a son or a brother, and so have brought a blessing on yourselves this day.”

After that Yahweh sent a plague on the people. God then told them that He would not go with them to the Promised Land, but he would send an angel to go before them. Exo 33:2,4, “When the people heard these harsh words, they mourned, and no one put on ornaments.” God told them. “You are a stiff-necked people; if for a single moment I should go up among you, I would consume you. So now take off your ornaments, and I will decide what to do to you” (Exo 33:5).  After that the Israelites no longer wore their ornaments (which were perhaps the jewelry the Egyptians gave them in Exo 12:35).

Then Moses took the tabernacle, or tent (Hebrew, אהל, ‘ohel, which is a tent for dwelling), which had likely been his own dwelling, and pitched it outside the camp where he could commune with God. (Exo 33:7). He took the tent outside the camp at that time because the camp was unclean for the people had not been forgiven for worshipping the calf (see Exo 32:35 and Exo 33:4-5). Then Moses went into the tent outside the camp. All the people in the camp stood each at his tent’s door and watched. God honored that tent by meeting Moses there with the pillar of smoke. (Exo 33:9). Then all the people back in the camp worshipped (bowed down) at their own door. In the tent, God would speak with Moses face to face, as a friend does with a friend (Exo 33:11). This tent was with the camp well before the Tabernacle and the Ark of the Covenant were constructed. That Tabernacle is a different Hebrew word than the tabernacle Moses pitched outside the camp; it is a משׁכּן, mishkan, while Moses’ tent was an ‘ohel.

It was in that tent where Moses again interceded for the people. Moses reminded the LORD, that He told Moses “I know you by name, and you have also found favor in my sight.” Then Moses asked Yahweh, “If I have found favor in your sight, show me your ways, so that I may know you and find favor in your sight. Consider too that this nation is your people.” God’s response was, “My presence will go with you, and I will give you rest” (Exo 33:12-14).

Moses wanted to be sure, so He said to the LORD, ” If your presence will not go, do not carry us up from here.  For how shall it be known that I have found favor in your sight, I and your people, unless you go with us? In this way, we shall be distinct, I and your people, from every people on the face of the earth” (Exo33:16).

God granted his request, “I will do the very thing that you have asked; for you have found favor in my sight, and I know you by name” (Exo 33:17).

Three is a very real dichotomy here and we must understand it. The fact is that God’s anger was aroused here and His wrath was against the people that rejected him by worshipping the calf in God’s place. He did that as an example to show us that sin results in the wrath of God and in punishment and death. The Apostle Paul wrote, “The wages of sin is death, but the free gift of God is eternal life in Christ Jesus our Lord” (Rom 6:23). God’s anger was justified Here.

However, if we were to stop reading the bible at Exodus 33:5 we would think that God was an angry God always waiting to punish someone for doing wrong instead of being loving, and merciful. Thousands of unbelievers actually believe that He is just that. Atheists are fond of making such claims. They believe it because they are totally unfamiliar with the Mercy of God.

The dichotomy is that Almighty God is the opposite of that. The very fact that He punished the people who sinned is to show the world that sin is deadly. All sin is deadly—not just the seven deadly sins some speak of, but all sin. God did not change His mind; He allowed Moses to intercede for the Israelites, knowing already the course of action He, Yahweh, would take (Isa 46:9-10). We can see that God is actually a loving and merciful God as we can see from the rest of this story:

The LORD continued: “See, there is a place by me where you shall stand on the rock; and while my glory passes by I will put you in a cleft of the rock, and I will cover you with my hand until I have passed by; then I will take away my hand, and you shall see my back; but my face shall not be seen” (Exo 33:21-23).

Afterward God told Moses to make two more stone tablets and present himself to God on Mt. Sinai but allowed none of the people to come near the mountain nor allowed their flocks to graze in front of the mountain. Then God would rewrite the commandments on the new tablets.

Moses went up on the mountain with the two new tablets and God came down from Heaven to the mountain in a cloud and proclaimed: “The LORD.” Then the LORD passed before him, and proclaimed, “The LORD, the LORD, a God merciful and gracious, slow to anger, and abounding in steadfast love and faithfulness, keeping steadfast love for the thousandth generation, forgiving iniquity and transgression and sin, yet by no means clearing the guilty, but visiting the iniquity of the parents upon the children and the children’s children, to the third and the fourth generation” (Exo 34:5-7). This Yahweh God’s true nature—He is merciful.

Moses bowed down and worshipped and said, “If now I have found favor in your sight, O Lord2, I pray, let the Lord go with us. Although this is a stiff-necked people, pardon our iniquity and our sin, and take us for your inheritance” (Exo 34:9).

Moses interceded and God renewed the covenant He had made with the people. He said, “I hereby make a covenant. Before all your people I will perform marvels, such as have not been performed in all the earth or in any nation; and all the people among whom you live shall see the work of the LORD; for it is an awesome thing that I will do with you” (Exo 34:10).

The entire covenant is written out in Exodus 34:11-28. You can read the covenant there for yourself. The camp was now holy once again because God forgave their sin. That meant the Tabernacle containing the Ark of the Covenant would reside within and not outside the camp. Some time later, beginning in Exo 35:1, the Tabernacle that contained the Ark of The Covenant was finished (Exo 39:43) and remained with Israel until Judah was taken captive by Babylon, in 586 BC, almost 900 hears later.

The two tabernacles were (1) the tent Moses took outside of the camp to commune with God (Exo 33:9), and (2) the Tabernacle containing the Ark of the Covenant that was placed in the midst of the camp (Num 2:17) for God to commune with man. (Exo 25:8;).

Jesus, the Son of God, God Himself in the flesh, who was sinless from birth, willingly took the wrath of God on Himself and suffered under the Roman scourge, which ripped the flesh and muscle off of His back down to the bone. A wreath of long, sharp thorns were pressed down into the flesh on his head, which bled profusely. He was stripped of his clothes (Joh 19:23), and his wrists and feet were nailed to a Roman cross with spikes, and he was hung there to suffer and die in humiliation and shame.

This means that Yahweh God, became flesh and deliberately took our punishment and died in our place. He is not an angry God always waiting to punish someone for doing something wrong. He is a merciful God willing to take the punishment we deserve as sinners upon Himself. All the things that are written in these Scriptures about God’s wrath and His mercy, were placed there as an example for us (1 Cor 10:6).

We deserve that cruel suffering and death, but Jesus willingly took our place on that cross. We are all sinners and we all deserve that death, but Yahweh, the merciful God Almighty, took the punishment for us.