On the second day after John baptized Jesus, He saw Jesus coming toward him and witnessed to two of his disciples that were with him and told them that Jesus was the Christ. Those two then followed Jesus Who turned and asked them what they were seeking. They asked Him where He was staying and Jesus told them to follow Him. One of them was Andrew, Simon Peter’s brother. After that,

Joh 1:41 (NKJV) He [Andrew] first found his own brother Simon, and said to him, “We have found the Messiah” (which is translated, the Christ).
Joh 1:42 (NKJV) And he brought him to Jesus. Now when Jesus looked at him, He said, “You are Simon the son of Jonah. You shall be called Cephas” (which is translated, A Stone).

Thus Simon son of Jonah could be translated “Hearing son of the dove.” And since the dove is a symbol of the Holy Spirit, we could also state it thus: “hearing from the Holy Spirit.”

We can apply this understanding to another passage:

Since God revealed this to “Simon Bar-Jonah,” he revealed it to “Hearing, son of the Dove,” or symbolically, “you heard this from God the Holy Spirit.”

There is another thing we can learn from these passages in Matthew. Remember that Jesus and his disciples were staying at Caesarea Philippi (Mat 16:13).

In the next verse, Jesus said:

Mat 16:18 (NKJV) And I also say to you that you are Peter, and on this rock I will build My church, and the gates of Hades shall not prevail against it. (KVJ, DRB, and others: “gates of hell”).

Caesarea Philippi is at the base of Mt. Hermon where Tel Dan is located. Very near the town is a cave where the Greek God, Pan, was worshipped. There are waters flowing out of that cave, which are headwaters of the Jordan River. The word Jordan, jor-dan, literally means “down from Dan.”

The Greeks called the town Paneas, because their god, Pan, was worshipped there. Pan was a satyr, with the torso and head of a man and the hindquarters, legs, and horns of a goat. He was a fertility god and a nature god who and was worshipped in caves and grottos instead of in temples.

The cave at the base of Mt. Hermon was a shrine to Pan where his worship took place. In the minds of pagans, their gods took refuge in the underworld, where fertility gods wintered. They returned to earth in the spring and they entered and exited the underworld through caves.

The cave at Caesarea Philippi was known as Pan’s grotto and since it was considered to be an entrance to the underworld, it is also known as the Gates of Hades or Gates of Hell. 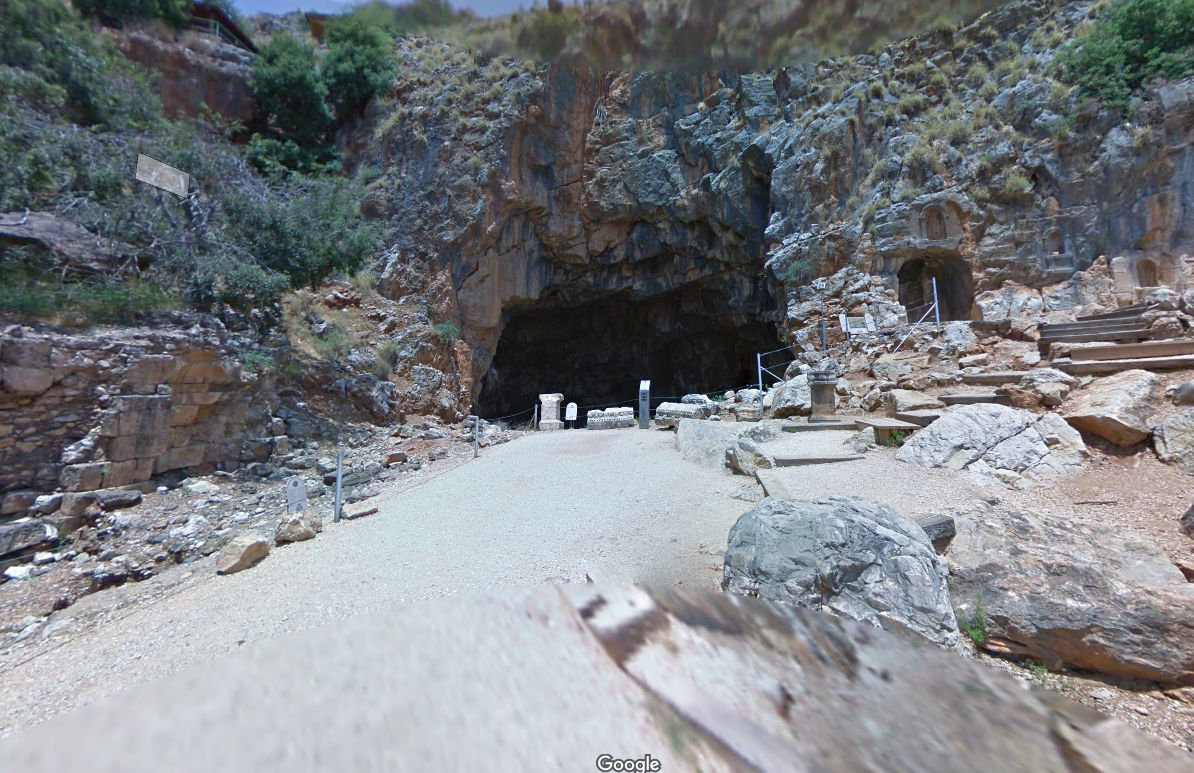 The Gates of Hell at Caesarea Philippi, Israel
Pan’s Grotto

Truly nothing, including the Gates of Hell can ever prevail against believers in Christ:

Rom 8:38-39 NKJV For I am persuaded that neither death nor life, nor angels nor principalities nor powers, nor things present nor things to come,  (39)  nor height nor depth, nor any other created thing, shall be able to separate us from the love of God which is in Christ Jesus our Lord.

This entry was posted in Bible Studies, Topical Studies. Bookmark the permalink.