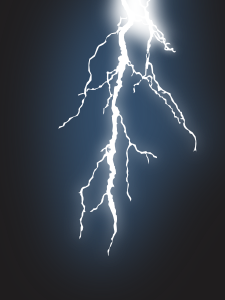 The question has been asked, “When did Satan fall like lightning from Heaven?” A similar question is “When did Satan’s rebellion occur?” Both questions refer to the same event.

We read in Ecclesiastes that there is nothing new under the sun. What has happened in the past will happen again. Our problem is that we do not remember the past and thus whatever we think is new has already existed in the past. See Ecc 1:9-11. That is in the Word of God and there is no error. Therefore, when we observe the Scripture closely, we see multiple occurrences of events. That is why there is a basic rule to remember when we study the Bible: Scripture interprets Scripture. When we study a particular subject, we should always attempt to find similar passages in the Scriptures that aid in our understanding of the subject studied. This will be the method we use in this study.

In the future there will be war in Heaven. Rev 12:7-9 “And there was war in heaven: Michael and his angels fought against the dragon; and the dragon fought and his angels, (8) And prevailed not; neither was their place found any more in heaven. (9) And the great dragon was cast out, that old serpent, called the Devil, and Satan, which deceiveth the whole world: he was cast out into the earth, and his angels were cast out with him.” We know that is in the future because it corresponds with Daniel, who prophesied about this future casting out in Dan 12:1, “And at that time [the time of the Antichrist- Dan 9:27] shall Michael stand up, the great prince which standeth for the children of thy people: and there shall be a time of trouble, such as never was since there was a nation even to that same time: and at that time thy people shall be delivered, every one that shall be found written in the book.“

In Rev 12:1-6, we see the past. We see the birth of Jesus. And we see an even earlier event where Satan and his angels were cast down to earth. The man child that the woman brought forth Is Christ, and the woman refers to both Israel and Mary. That is past. Satan and his angels were already on earth in the Garden of Eden so his casting out was further in the past than the birth of Christ. Additionally Satan already had to be on earth when the woman gave birth in order for him to be standing by, using King Herod as his emissary, in an attempt to devour the child.

In Rev 12:7-17 we see the future. We see the war between Michael and Satan as prophesied by Daniel (Dan 12:1). That begs the question. If Satan was cast down in the distant past, and he will be cast down in the future, when did he get back into Heaven? The answer to that is Satan and his angels were likely cast out of Heaven at the Garden of Eden when God pronounced judgment on the serpent, thus they were forced out of their home in heaven and now abide on the earth. Yet, though his abode is on earth, Satan still has access to Heaven (Job 1:6; 2:1).

Paul calls Satan the prince of the power of the air (Eph. 2:2), indicating that Satan has power in the earth and its atmosphere. Paul also wrote in Eph 6:12, “For we wrestle not against flesh and blood, but against principalities, against powers, against the rulers of the darkness of this world, against spiritual wickedness in high places.” So we know that Satan currently has his talons in every activity in the world, even the church. His demonic forces are everywhere on the earth.

We also note that, even though he was cast out of Heaven to make his abode on earth, Satan still has access to Heaven and to Yahweh (Job 1:6, 2:1). Thus, in the future, Satan and his demons will once again make war with Michael and the angels in a final attempt to usurp God’s throne. I believe that Satan really does think that he can defeat his Creator. That is when he will permanently be cast out of heaven, never be allowed access to Heaven again, and eventually end up in the Lake of Fire. We read that in Rev 12:8, “And prevailed not; neither was their place found any more in heaven.” (Emphasis added). When this happens Satan will be permanently and eternally cast out of Heaven whereas now he still has access.

That still does not tell us when the original casting out of Satan and his angels occurred. In Luk 10:18 we read, “And He [Jesus] said unto them, I beheld Satan as lightning fall from heaven.” The context of that statement by Jesus is when He, Jesus, gave His disciples, who were on earth, power over Satan, the enemy. The fall of Satan happened before Jesus’ incarnation (Isa 14:12; Eze 28:16; see also Lightfoot, Gill, and others), while He was still in Heaven with his Father: Php 2:5-8, “Let this mind be in you, which was also in Christ Jesus: (6) Who, being in the form of God, thought it not robbery to be equal with God: (7) But made himself of no reputation, and took upon him the form of a servant, and was made in the likeness of men: (8) And being found in fashion as a man, he humbled himself, and became obedient unto death, even the death of the cross.“

In Genesis 1:2, the root or uninflected word rendered ‘was’ in the KJV, is היה hayah, or ‘to be’ in English. However, the inflection, or conjugation, of היה hayah becomes היתה, haytah in Genesis 1:2. Let me explain. Hebrew verbs have stems. Without getting too technical, two of the stems of the verb היה hayah, are qal and niphil. Qal is simply the lexical or dictionary definition of the word; it is also the strong form of the word. Here is simply the past tense (perfect) of to be, which is, ‘was.’ Niphal is the passive or reflexive form. In English, that is “occurred, came to pass, was done, was finished, was completed, etc.” The the full inflection of the word used in Gen 1:2 is “qal perfect (or past tense) 3rd person feminine singular.”

There is no gap between Genesis 1:1 and 1:2. There was no creation of the earth and later a recreation. The earth was created once and that creation is described in Genesis 1:2 and 1:2. Thus the fall of Satan to earth happened sometime after the creation of the earth. We do not find any place in the Scripture where it specifically tells us the time when the original rebellion and fall of Satan took place. However, with all the information we do have, we can make an educated deduction.

In order for Satan to fall from Heaven to earth (Luk 10:18; Rev 12:4), the earth had to be created. Therefore, the fall must have happened after the seven days of creation and just after Eve met the serpent in the Garden and sin entered the world. This likely occurred when  God cursed the serpent. We don’t fully know that time period. Bishop Ussher wrote, in his “Annals of the World” that Adam & Eve’s sin occurred sometime between 4004 BC and 3874 BC. However, that was also an informed deduction that Ussher based on the chronology listed in the genealogies in the Scripture.

On good Biblical authority, we can fairly confidently assume, with reservations because we do not know for sure, that Satan was originally cast out of heaven sometime after the creation of the earth and after Eve met the serpent in the Garden of Eden.