Passing Through the Fire

The temple workers had cut and split wood for several days preparing for the solemn rites to be performed today. They began early in the morning to build a fire in the fire pit. As the day progressed, more and more firewood was cast into the fire pit so that the heat had become almost unbearable but they continued in anticipation of the scheduled events. They stoked and stoked the fire until it had become almost white hot. Finally, all was ready for the festivities.

There had been a long drought, and the people were weary of it. Food was becoming scarce and many were going hungry on a regular basis. Something had to be done to end this drought. Why had the gods allowed such misery? Perhaps it was because no sacrifice had been given.

A young mother and father were among this hungry group. Their children were going hungry and there was only enough food to feed them every other day. Both parents had not eaten in several days. Their three month old child was feeling the effects of the hunger and was now crying. After much discussion the mother and father had come to a heart-wrenching decision. They would attend the rituals at the temple today.

They got dressed and took their children and the baby and headed out. There were tears in both their eyes as they approached the temple where a huge brazen statue of a man with a bull’s head with his arms outstretched stood. The statue was glowing red hot with white hot fire coming from his open belly.

As the couple approached the gathered crowd went wild. The drummers began drumming and the horns began to blow. The father took the baby from his wife, who was weeping profusely by now, and walked forward to the waiting arms of the statue. It was so hot that his eyebrows were burning and his clothing was scorching. At last he could get no closer and tossed the three month old child into the red hot arms of the statue of Molech. The sounds of the instruments and the screaming of the crowd drowned out the baby’s horrible screams. The mother and father could see but not hear the screaming child writhing in torment. After a short while the writing stopped. The baby had succumbed to the intense heat. The body of the baby burned and shriveled as it did so. Soon it had shriveled so much it fell through the arms into the fire in the belly of the statue. Other children were sacrificed as well. The gods were now satisfied and hopefully the drought would soon end. This was known as passing their children though the fire. 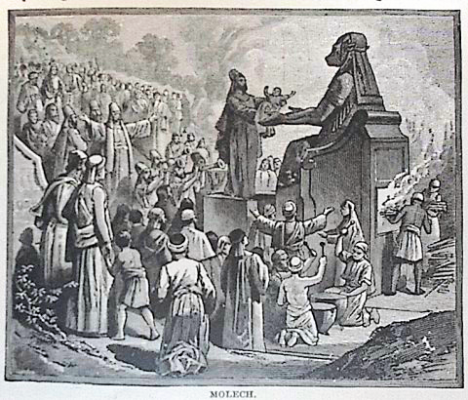 Molech (Image from: The Story of the Bible (1884) by Charles Foster,
Illustrations by F.B. Schell and others; Public Domain)

What a horrible thing to do to a child. Luckily in our civilized society today we don’t allow such a thing to happen. We don’t believe in such hokum. We are an enlightened society in which only scientific truth is allowed. No one believes in such gods. What drivel. Our society would never fall victim to such abomination. Or would we?

The Ammorites and their surrounding nations sacrificed thousands of children to the fire god, Molech. The abortion industry in the United States alone has killed 53 million plus children through the practice of abortion. The sacrifices to Molech were just a fraction of that number.

We no longer have idols like Molech we worship. Out idols are different. They are, among other things, choice, pleasure, and selfishness. Yet they are idols just the same and abortion is on the same level as sacrificing children to Molech.

Let me just tell you about abortion. At twelve weeks the fetus is a fully developed child with hands, feet, fingers, toes, eyes, nose and mouth. Their heart is beating and brain waves are discernable. Fetuses suck their thumbs and are sensitive to touch, noise, and movement. Twelve week fetuses have the same physical processes we have. They are tiny human beings. At twelve weeks a fetus will fit into the palm of your hand.

Before you continue reading, let me warn you that the following information is graphic and may make you angry. Just remember that God loved all sinners, including abortionists, enough that He gave His Only Begotten Son to die in our place for the forgiveness of sins. He loved you and me as well and provided His Son as a sacrifice for all of our sins. Violence against abortion providers or facilities IS NOT ACCEPTABLE. We have the laws, the courts, the voting booth, and the public forum available to us as free people, and that is where we must dispute this practice.

In an abortion, the abortionist (I refuse to call them doctors) expands the vaginal canal with a speculum to enable him to observe the cervix. He then dilates the cervix with special graduated size dilatation instruments. He then inserts a vacurrette or a vacuum tube that is attached to a vacuum pump with a hose into the uterus through the cervix. The tube has a sharp edge on it for dismembering the fetus–without anesthesia, I might add. The suction tube is then applied to the body and appendages of the still living fetus and literally cuts and sucks pieces of the body, amniotic fluid, and placental material out of the womb. Normally the fetus remains alive as the feet and legs are cut and sucked away, and then the torso is sucked out piece by piece. While the fetus is still alive and when the suction begins, the baby tries to move away from the instrument. As the tearing off of the limbs begins, ultrasound shows the baby screaming in pain and writhing in agony. The scream is silent but it happens, just as the screams of the babies sacrificed to Molech were silent because the screams were drowned out by the drums, horns, and crowd noises.

Finally, all that is left in the womb is the baby’s head. It is too big to be sucked out so the abortionist must use an instrument to crush the skull and allow him to suck out the inside parts of the head including the brain, mouth, tongue, eyes, ears, etc. Then he sucks out the crushed skull and finally cleans out all the left over pieces of the baby and the abortion is complete. Thousands of abortions exactly like the one I described happen daily in the USA.

Abortion stops a beating heart and kills a living child.

Children are a gift from God. Abortion destroys that gift.

The argument that the unborn baby (zygote, blastocyst, embryo, or fetus) is not a child until birth is spurious. Legally that may not be so at this time, but it is morally so. Biologically speaking, life begins at conception. All of the indications of life are present. The cells are living, they can reproduce and they can consume nutrients and discard waste. They have 23 pairs of chromosomes and tens of thousands of genes that they received from the parents. Biology tells us that the unborn baby is a living thing from the moment of conception. If the baby is alive from the moment of conception, then when we abort a fetus, we are killing a living thing, in this case, a living human being.

It is unfortunate that abortions regularly occur from the moment of conception until the moment of birth. Yet it is fortunate that the tide is turning. No longer do a majority of Americans agree with abortion on demand. We are on the road to prevention of abortions. It is a long road and there is a long way to go until we reach the end. Yet we must persevere and keep on course until the unborn are safe in the womb, until the unborn are legal persons, and until abortions really are rare.

This entry was posted in Topical Studies. Bookmark the permalink.