Gen 48:1 And it came to pass after these things, that one told Joseph, Behold, thy father is sick: and he took with him his two sons, Manasseh and Ephraim.

(Please note that the names Israel and Jacob are used interchangeably in these passages and in my commentary. They are both the same person..–Bro. Mark) It appears that Jacob’s sickness was terminal and that was the message Joseph received. One translation renders it, “behold, your father is ailing.” Another says “failing rapidly.” Expecting a blessing form his dying father, Joseph wisely took his two sons with him to visit his sick dad.

Gen 48:2 And one told Jacob, and said, Behold, thy son Joseph cometh unto thee: and Israel strengthened himself, and sat upon the bed.

Apparently, Jacob was on his death bed, but gained the strength to sit up. From personal experience, on death watches the dying person often rallies enough to greet a family member who has just arrived. Jacob did just this. When Joseph arrived, Jacob gave him a short history lesson.

Gen 48:3-4 And Jacob said unto Joseph, God Almighty appeared unto me at Luz in the land of Canaan, and blessed me, (4) And said unto me, Behold, I will make thee fruitful, and multiply thee, and I will make of thee a multitude of people; and will give this land to thy seed after thee for an everlasting possession.

We recall this episode from Genesis 35:11, which is a restatement of the Abrahamic Covenant of Genesis 12:1-3. Let us print the verses in question here:

Gen 35:9-12 Now that Jacob had returned from Paddan-aram, God appeared to him again at Bethel. God blessed him, (10) saying, “Your name is Jacob, but you will not be called Jacob any longer. From now on your name will be Israel.” So God renamed him Israel. (11) Then God said, “I am El-Shaddai—’God Almighty.’ Be fruitful and multiply. You will become a great nation, even many nations. Kings will be among your descendants! (12) And I will give you the land I once gave to Abraham and Isaac. Yes, I will give it to you and your descendants after you.” (NLT)

Jacob would have rehearsed this story many times when his sons were growing up, mainly so that they would know their roots and carry them with them into the future. However, he had not had Joseph with his for decades, so perhaps in Jacob’s mind this was a good time to tell Joseph this story again, in case he had forgotten it. This is merely speculation on my part, but educated speculation.

Gen 48:5 And now thy two sons, Ephraim and Manasseh, which were born unto thee in the land of Egypt before I came unto thee into Egypt, are mine; as Reuben and Simeon, they shall be mine.

With this statement, Jacob adopted the two sons of Joseph making then a part of the twelve tribes. We may also note that this statement of adoption was made by Jacob before he knew the two boys were with Joseph (Gen 48:8). Reuben and Simeon were the number one and number two sons of Jacob, and with this adoption, Ephraim and Manasseh would be his first and second born sons of Joseph as Reuben and Simeon were. According to Louis Ginzberg’s The Legends of the Jews1, Joseph’s wife, Asenath cared for Jacob in his later years in Goshen and she is the one that had sent word to Joseph that his dad was dying. In Genesis 28:22, Jacob vowed to give God a tithe of everything. According to the legend in this work, he had fulfilled that vow in material possessions but not in sons. Jacob had only nine sons from which to derive a tenth, because four of his sons, Reuben, Joseph, Dan, and Gad, (there were thirteen including Levi) were the firstborn of their mothers, Leah, Rachel, Zilpah, and Bilhah, and thus were already consecrated to God as firstborns. There was no way to give nine tenths of a son to God. Hence the addition of Ephraim and Manasseh made the full complement of sons to be ten. Thus one son, Levi, could be given to God as a tithe. This is what Midrashim teach, and is probably exactly what happened. Indeed is seems very plausible. I accept it.

According to the Chronicler (traditionally Ezra, but modern scholarship is skeptical of this authorship) Reuben lost his birthright because he committed incest with Bilhah, and that birthright was given to Joseph’s sons for that reason. 1 Chronicles 5:1: “Now the sons of Reuben the firstborn of Israel, (for he was the firstborn; but, forasmuch as he defiled his father’s bed, his birthright was given unto the sons of Joseph the son of Israel: and the genealogy is not to be reckoned after the birthright.” This is the straight Biblical reason, though the Midrashim are probably correct as well.

Gen 48:6 And thy issue, which thou begettest after them, shall be thine, and shall be called after the name of their brethren in their inheritance.

Joseph’s two boys now were the sons of Jacob; therefore all of Joseph’s progeny from that day forward would be members of the tribes of Ephraim or Manasseh. Though they had separate territories, Ephraim and Manasseh were collectively known as the tribe or house of Joseph. The twelve tribes were, Asher, Benjamin, Dan, Gad, Issachar, Joseph (Ephraim and Manasseh), Judah, Levi, Naphtali, Reuben, Simeon, Zebulun, and Levi, (not reckoned with the previous twelve because Jacob gave Levi to God as a tithe). Though in the listing of the tribes in the book of Revelation, Dan is omitted, Levi is included, and Ephraim’s name is replaced by Joseph. Theories about as to why this is so. Dan was a tribe of idolaters and that may have been the reason for its omission.

Gen 48:7 And as for me, when I came from Padan, Rachel died by me in the land of Canaan in the way, when yet there was but a little way to come unto Ephrath: and I buried her there in the way of Ephrath; the same is Bethlehem.

Rachel’s tomb is traditionally located about a mile north of the center of modern Bethlehem on a street named the Hebron Way חברון דרך (Derech Hevron). This street runs from the center of Bethlehem into the Jerusalem Way at the wall of the Old City, that is, to Mount Zion, which is about four miles north northeast of the tomb. The reason for these intricate directions is to state that the traditional tomb is possibly not the actual burial place of Rachel.

That distinction may go to Ramah on the border between Benjamin and Judah. One reason is this. Jacob traveled from Paddan Aram in Haran with a planned destination of Ephrath, which is better known as Bethlehem. Haran is north of Jerusalem in present day Iraq and Bethlehem is a mile or two south of Jerusalem. According to his own words, Jacob had not yet arrived in Bethlehem when Rachel died. That certainly allows for the tomb to be a mile north of Bethlehem.

The problem with the Bethlehem location is twofold. Remember that at this time Jerusalem was a village with a threshing floor and not the large town it was in Solomon’s day. It was not a significant place at the time, with the exception that Isaac was almost sacrificed there.

Again, the problem is twofold. There are two scriptures that lead us to postulate a different location for the tomb. The first is Jeremiah 31:15, “Thus saith the LORD; A voice was heard in Ramah, lamentation, and bitter weeping; Rachel weeping for her children refused to be comforted for her children, because they were not.” There are two villages named Ramah mentioned in the Bible and one of them was located on the road from Haran to Bethlehem at the border between Benjamin and Judah. It is modern day al-Ram, about seven miles north of Jerusalem. It lies on the road Jacob probably took on his journey to Bethlehem.

The second problem is this passage: 1 Samuel 10:2, “When thou art departed from me to day, then thou shalt find two men by Rachel’s sepulchre in the border of Benjamin at Zelzah; and they will say unto thee, The asses which thou wentest to seek are found: and, lo, thy father hath left the care of the asses, and sorroweth for you, saying, What shall I do for my son?” Here the prophet Samuel tells us that Rachel’s tomb was actually in the border of Benjamin at Zelzah. Saul was to travel home from his visit with Samuel to the tomb of Rachel, and finally to Gibeah in Benjamin (for Saul was a Benjamite), and pass the oaks at Tabor on his journey home. It would appear from these two passages that perhaps Rachel was buried at Ramah in Benjamin.

There is a place near al-Ram northeast of Jerusalem called Qubur Bani Isra’in (Tombs of the Children of Israel) with a stone structure overlooking the Quelt River in Benjamin. This is a possible location for Rachel’s tomb. 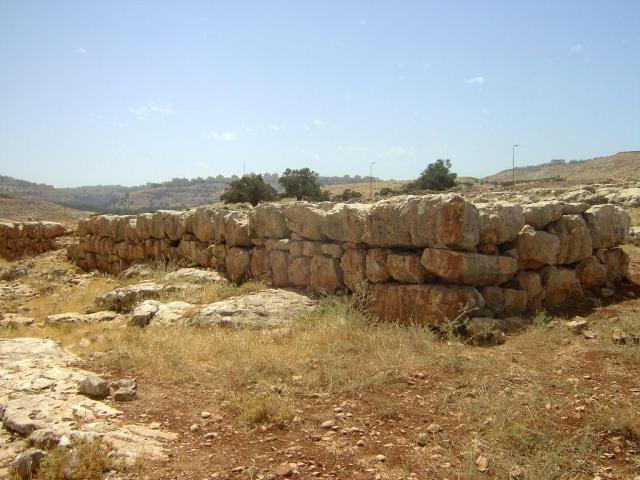 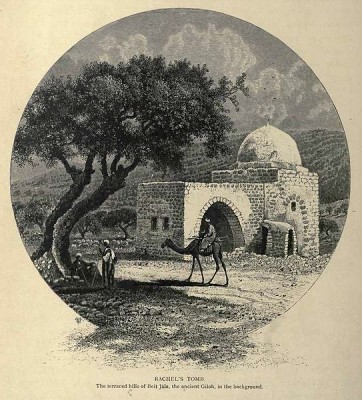 Traditional location of Rachel’s Tomb, קבר רחל , at Bethlehem (Ephrath).. This work is in the public domain

Today the tomb of Rachel in Bethlehem is enclosed in a fortress built to protect it from the enemies of Israel and the constant threat of war in the area. I have been unable to gain permission to show a photograph of the fortress showing the tomb within. Conduct an Internet search for “Kever Rachel” and you will find plenty of photos.

Regardless which place Rachel was buried; both places are within a few miles of each other. Jacob lost his beloved Rachel on that journey from Haran and he remembered the exact spot of her tomb. His dying wish was to have his own corpse buried next to his wife.

Gen 48:8 And Israel beheld Joseph’s sons, and said, Who are these?

Jacob did not recognize the boys because of his vision. See verse 10 below.

Gen 48:9 And Joseph said unto his father, They are my sons, whom God hath given me in this place. And he said, Bring them, I pray thee, unto me, and I will bless them.

Two things. Joseph recognized that children were a gift from God and acknowledged that God had given them to him. Secondly, Joseph’s business probably prevented him from having much contact with Jacob and perhaps Jacob had not seen the boys for some time. This is conjecture. Ginzberg’s Legends2 says that Asenath stayed with Jacob for some time and if that is true, it is hard to believe that Jacob had not seen the boys. It is easy to believe that the boys were well behaved and were silent while Joseph visited with his father and that Jacob could not see them clearly because of his vision.

This would be the blessing of a patriarch, and not just a “God go with you and I wish you well,” type of blessing. This would be where the birthright was passed on to progeny.

Gen 48:10 Now the eyes of Israel were dim for age, so that he could not see. And he brought them near unto him; and he kissed them, and embraced them.

Israel was 130 years old, so his vision had waned. In my forties I began to lose my ability to see fine print. Now, when I take off my glasses it is difficult at time to make things out. It is a normal thing for many if not most of us to lose vision as we age. I am sure Jacob could see the boys but could not make out which was which.

Gen 48:11 And Israel said unto Joseph, I had not thought to see thy face: and, lo, God hath shewed me also thy seed.

Jacob was grateful that he was able to see his son, who he thought was dead, but lived. He was even more grateful to see Joseph’s sons.